The team or the troupe of the Mortemer Abbey offers you several pages of the French literary heritage in some short texts (so-called) and some fables collection. 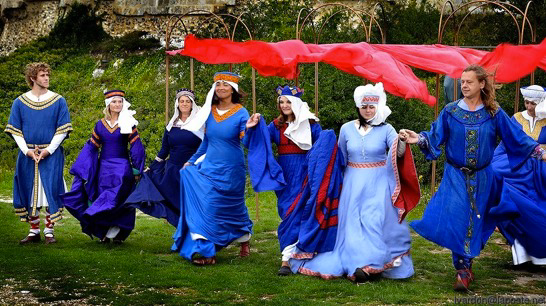 Rutebeuf was a poet who has composed the short or long texts about the second half of the XIIIth century current topics. In these stories and fables, he mentions the lack of great nobility, the misery of the poors, injustice and the world wounds. He doesn’t miss to underline vices of the society, the cheating charlatans or, again, the wickedness of villeins.

This man which has Champagne roots, wrote in Paris and earned his living only with his pen.
The “says” is a poetic form of the Middle Ages through which the author speaks directly to the audience by evoking one or more themes.
The fable is a form of street theater before the time that tells a story through the narrative with the intervention of several characters and parties in the form of dialogues.

So you hear the so-called: the Herberie (a monologue of a pharmacist-physician-charlatan selling potions and suggesting various ways of healing) and the State of the World and the World Wounds (the audience learns that the world was wrong already in the thirteenth century, and that the human being has not changed much), Aristotle (teaching about the nobility of mind and actions addressed to young ruler); Pet of the Ugly (satirical text about boors) the lady who walked three times around the church (a fable that tells a story of a very foxy lady).

The fable Of Whores and Jongleurs by an anonymous author, citing the precarious situation of artists, will also be included in the program.
These texts have been adapted in the current language, but not censored. The form or style of representation is aesthetic and without vulgarity.

Each text is preceded by a presentation with an explanation of the historical, political and artistic context of the thirteenth century in the kingdom of France. 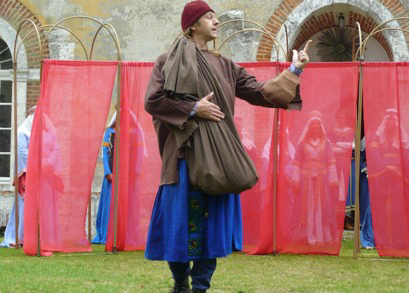 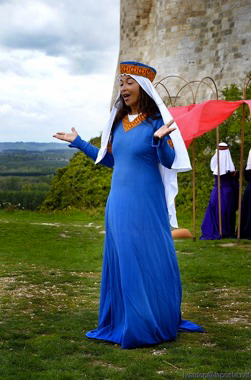 This program can give your event an unexpected aspect, really different compared to the traditional benefits of the genre. This is a genuine medieval representation of its content and its form.
"The glaring news of these texts does not need to be emphasized, it surprises us in a few lines," - said the director Vytas KRAUJELIS.
Members of the Association will Mortemer Abbey dressed in costumes of the thirteenth century, so easily identifiable.
The decor is light, adaptable to various locations.
The program text can be presented with or without dance, as it can be presented in chunks or continuously.
Number of participants on stage: between 8 and 10 (including two professional actors).
Duration of continuous service: 1 hour.
An outlet and an electrical connection are required (unless you choose the version without dancing).

The company has its sound equipment. 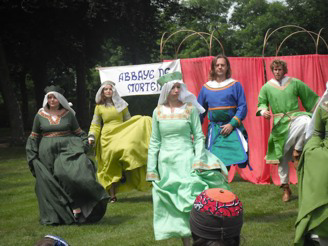 This punctuated dance program can be played several times a day. For all additional information or direct contact you can contact: