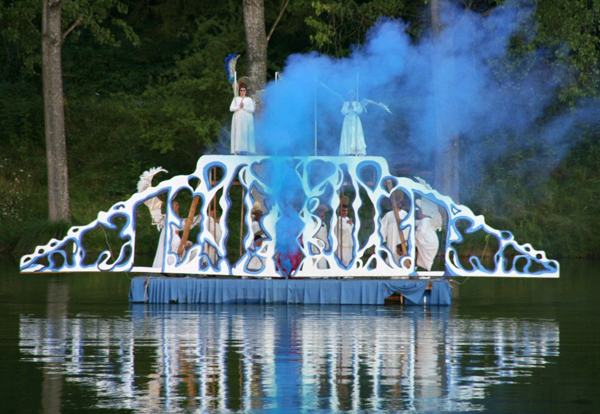 OVER THE PONDS OF MORTEMER

Show on water and on land

A show without words, on water and on land, you imagine?
Forfeiture angels without doubt have you heard about, but have you seen?
Love the devil, do you think it does not exist?

That's part of what evokes the new show produced by the Association "Friends of the Mortemer Abbey", devilments.

Dance, mime and visual charts make this show which takes place partly on water and in water ponds.

The stage director Vytas KRAUJELIS had to also assume the burden of choreographer and, costume and decor design.

The word of the author :

"At the Mortemer Abbey almost 900 years old, we are doomed to perpetual renewal.
For many years, our theatrical creations, we pay tribute to the history of the Normandy Dukes and Kings of England. The ruins of Mortemer offers also another attraction, they whisper to us some legends. Many people among our visitors and spectators, are hoping to glimpse a ghost ...

Behind the scenes are the ponds, so I wanted a change of scenic pleasures. My idea was the creation of "freshwater follies." How did we get to devilments? "
"After honored history with a dozen shows, I was delighted to look into another own appearance of the Abbey, the legend. I wanted to arouse curiosity and to stimulate the audience. Create a good entertainment is as difficult to create a tragedy or a drama.

I'm Lithuanian , I live in France for eleven years but I have not forgotten where I come from and how I grew up. Folk legends and stories of my country are full of stories where the man submits or operates the devil. Christian dogmas rub pagan beliefs.

A Lithuanian legend has imposed itself, giving me the opportunity to mix with the divine the evil and the multiplicity of characters while remaining very accessible to the wider public, and with no word!

In Lithuania, people still offer the best to their guests when they’re at home. I act like that, and I offer to the public the beauty of traditional dances, the fiery temperament of my country (we are calm but only in appearance), and a legend which speaks only of love.

THE SUBJECT OF THIS SHOW - LEGEND.

A miller wants to marry a girl. He made a pact with the devil, and in exchange, promises to give their unborn child. When the time comes to keep his promise, the miller is trying to deceive the devil who takes revenge ...

It seems that all ends well. Among the many characters, you will see farmers and peasants, devils men and devils women, angels, bigoted, and time personified in four seasons.

This original to see in family show was played in 2007 at Pentecost, in July and August. At each performance, he was welcomed by an enthusiastic and friendly audience that vibrated to the sound of boisterous polkas, some even dancing on the bleachers. We decided to present it again in 2008. 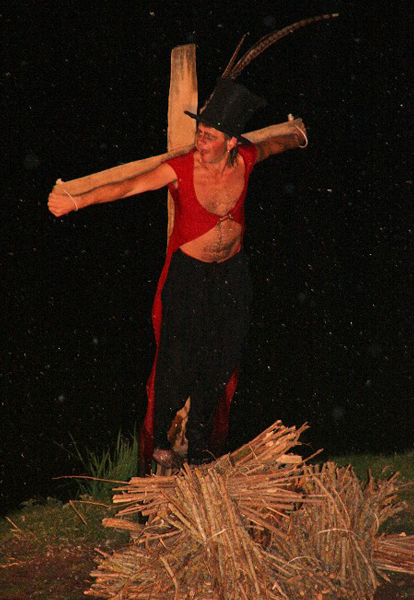