According Rutebeuf poet of the thirteenth century,
By troops "arbre doré", in residence at Theatre Espace Jean Bauchet of Forges les Eaux.
Directed by: Vytas KRAUJELIS.

The Forges space hosted the Norman Company ARBRE DORE for creating MIRACLES from Rutebeuf, Parisian poet of the thirteenth century. It comes in pieces that are among the first of the French theater. 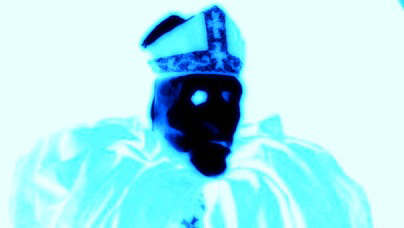 The Miracle of Theophile and The Miracle of the Sexton have reviewed the footlights after their long absence in the theatrical landscape.

The first miracle has excluded a man, abandoned, who calls  the forces of evil to recover its place in society.

The intervention of Our Lady releases Théophile from his pact with Satan.

In the second miracle, we see the devils tempting  two virtuous beings: a Sexton and Lady. Extensive handling snaps and disrupts an abbey and the nearby residents. Notre Dame managed to cast out demons and to restore the order.

MIRACLES is a complete show with the theatrical game, dances and human-sized puppets.

MIRACLES is a show where the drama, the tragedy alongside the farce and comedy, violence is followed by tenderness, loss of guide marks to search for valid solutions.

with the support of the Space of Forges from the City of Forges-les-Eaux and  Mortemer Abbey.

ON THE EDGE OF PONDS :

Children's show with puppets 25 followed by a show for adults and children.

PUPPET WIRE
for children and adults
by Vytas KRAUJELIS

The magic of live performance still operates with younger audiences. Nothing can replace a theatrical paced in front of children or adults.

Troop of the Mortemer Abbaye is pleased to announce the creation of a your new puppet show.

This show was created from ancient texts. It comes tales:

The string puppets of various sizes operating in a semi-circle decoration. The number of puppets: 21-22.

Animation  of the Dukes Path by the sculptor and creator of path together with animators.