After « ALIENOR LA MEMOIRE D’HENRI » and « RICHARD 1er COEUR DE LION », Vytas Kraujelis is ending his trilogy with this new creation presented during the Mortemer Abbey medieval festival of 2006, which traces the history of the last Normandy Duke and King of England. 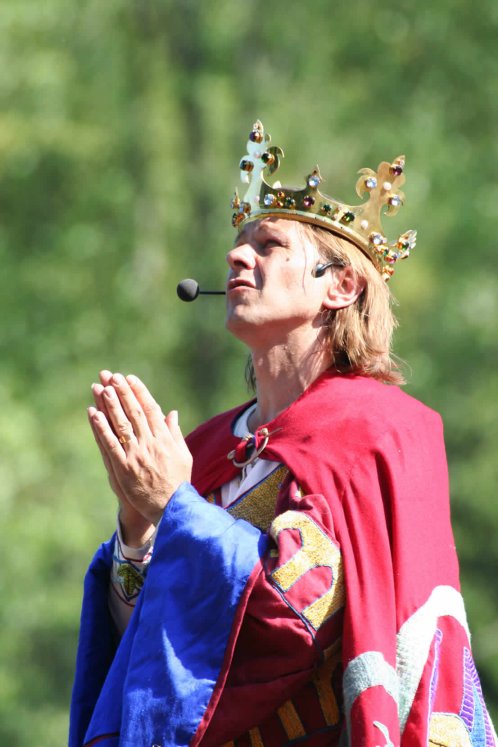 Christmas Day 1166 in Oxford born the last child and last son of Eleanor of Aquitaine and Henry II. He is the brother of Richard Ist « The Lion Heart ».


Newest member of the family, he could not hope to be on the throne, yet fate has decided otherwise. In 1199, the death of Richard Ist « The Lion Heart », Jean inherits all the possessions of the Plantagenets.


Movies and novels have made from him a man dressed in black, negative and malicious character unable to do anything other than betrayal. But who was he truly? Why Normandy is under the French crown power in the early thirteenth century?

The piece is built around the main character, King John. He is accompanied by his mother, Eleanor of Aquitaine, his wife, Queen Isabella of Angoulême Taillefer and William “the marshal”. With them, the lords and ladies of the past weave this web.

THE SHOW CREATOR IS SPEAKING

"With Jean Sans Terre, I bid farewell to the family of Plantagenet and the Dukes of Normandy, at least for the moment.


I find it very fun to complete this kind of creation by "bad subject." They are the most funny because they have a different look at the glorious and highly respected family characters.


Among other theatrical means I use the opposition of character described by the history of man, as I imagine, where jokes, dances, and even the decor of the spectacle.


Some people hide their fragility by irreverence. John is in this way. Not to suffer, people laugh. Jean did the same ... My ambition is to marry laughter to tears. I hope to be fully successful. "