The Empress Matilda and the war for the crown of England

The artistic team of the Mortemer Abbey is talking about the Norman and French history and literary heritage by varying means of expression for over ten years. Sometimes, the team brings old creations up to date. For the 2010 season, the puppet show "Empress Matilda and the war for the crown of England" created 7 years ago, will see daylight in a new version. 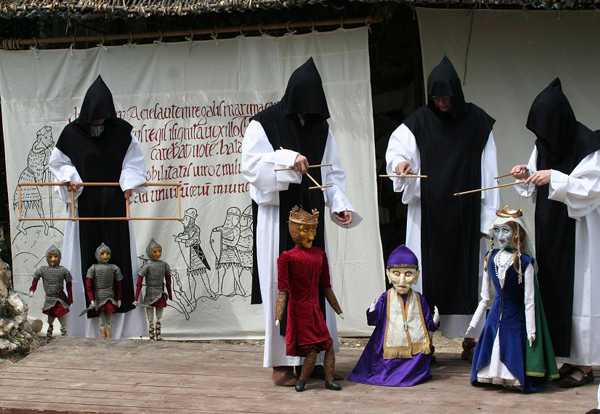 A short summary of the facts, which took place in the twelfth century: the death of the King and Duke Henry Ist in 1135, his legitimate heir Matilda is forced to fight for their own rights, as his cousin Stephen of Blois usurped the England throne and was deprived of his inheritance of the Normandy Duchy.

Who was the Empress Matilda? To place her more easily in History, notice that she was the granddaughter of William the Conqueror and the great mother of Richard the Lion Heart. She is the mother of the Plantagenet dynasty.

The show "Empress Matilda and the war for the crown of England" evokes precisely the episode of her life when she began military operations.

"We play with puppets as the life and existence playing with us, humans - with a detachment towards cruelty, a biting irony against traitors, humor to stupidity and a tenderness towards the misfortunes of an injured woman. In half an hour we are able to tell you a real and serious story, but in a funny, accessible and touching way. You can say: these are stories of kings and dukes! Yes, but with a crown on the head or not, we are fighting for our existence on this earth. "Well expresses the creator of the show, Vytas KRAUJELIS.

The show is performed by the actors from the Mortemer Abbey, handling 25 string puppets. This show aimed both adults and children. The representation is also an opportunity to approach the past in a different way, to induce a discussion on the Normandy History, that you knew it a little or not at all? No unnecessary worry! We will succeed to make you plunge in it again!